Call Us Today! 402.871.5351|shawna@balancedbooksomaha.com
Previous Next 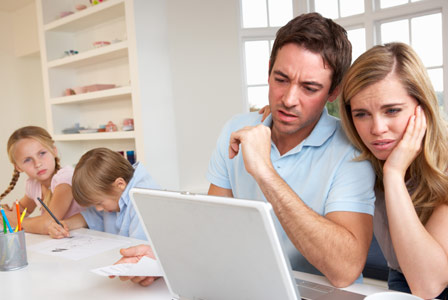 In case you haven’t heard it a million times before, we’ll tell you again: money is one of the biggest sources of relationship conflict and a leading cause of divorce. Twenty-seven percent of Americans say disagreements over finances are most likely to erupt into an argument, ahead of arguments over children, chores, work, and friends, according to a recent survey of married or cohabitating couples by the American Institute of Certified Public Accountants.

Many couples fight over their finances, because both partners don’t share the same attitude about money (one person is a spender and one’s a saver; one of you wants to use your tax refund for a vacation, while the other wants to put it toward a new TV; your partner believes you should combine your funds, while you think what you earn should be yours to spend as you please…you get the point). So if you don’t want money matters to take a toll on your relationship, you’re going to need to learn to manage your money as a team. Here are some tips to get you started.

Devise A Budget Around Your Goals

To create a budget you both can actually stick to, build it around tangible goals you come up with together. These should include short-term, intermediate and long-term goals you both want to achieve, so you can work together toward a common financial goal. Plan to have several conversations about your retirement, charitable giving, estate plans, and addressing financial setbacks. If your visions or communication styles are different, you might consult a financial advisor about how to reach common ground.

Short-term goals might include building a savings safety net of X amount by the middle of the year or deciding to put X amount in savings each month. Intermediate goals might include the following: “We want to be out of credit card debt in two years,” “We want to save enough for a down payment by the end of the year” or “We want to have X amount in our retirement fund five years from now.” And long-term goals could include investing X amount of life insurance or launching a small business or buying a second home down the road. These goals should change every few months as your financial situation (grad school, perhaps?) or plans (baby?) evolve. Add new goals as you meet old ones, tweak any that aren’t working and revisit them together on a regular basis to monitor your progress.

Once you have your goals mapped out, start with your monthly income and subtract the projected cost of that goal. Then create a monthly budget around this new figure. Start with the most important expenses and work your way down the list until you’re out of money. Keeping track of your accounts receivable (all the money coming in from both spouses) and your accounts payable (all the bills such as mortgage, car, and food) on a spreadsheet or software program such as Quickbooks may help you manage your budget and get to your goal faster as you see where you can add or cut funds as needed.  Just leave some room for discretionary purchases. If you have a budget that’s too constricting, people have a hard time sticking to it

Creating a budget for you and your spouse will take the guesswork out of your money arguments. A budget gives you factual information. A lot of arguments around money have to do with assumptions and emotions. But if you have a budget, you can take a look strictly at the numbers, which will enable you to have a fact-based discussion about any disagreements. As an added bonus, it will be much easier at tax time if you keep records of your spending each month.

To avoid blow-ups over purchases, even if they those expensive shoes were on sale, or the cable bill that he completely forgot to pay again, it’s important to spell out general expectations about how you will handle your expenses and spend your cash. For example, agree to a spending limit that nobody can exceed without discussing it first. Work together to come up with rules that address the issues that usually cause conflict. It is important for you to have a clear sense of what is negotiable and non-negotiable. However, it is equally as important to know that there is no one right way for a couple to approach finances, so keeping an open mind about an alternative approach could help you and your partner to navigate a middle ground.

Keep in mind, money issues can be emotional, so agree upfront to treat each other with respect and kindness. Hold your discussions at non-stressful times, and plan to have several shorter conversations rather than one long one. Listen carefully to your partner’s point of view, and ask the same in return. Be specific about what you want the conversation to be about. Also try to be as prepared as you can before you sit down together. And even if one of you is more interested in finances, make an effort to look for opportunities to discuss them.

Mismatched spending (or saving) styles are pretty common in marriages, but the key is to accept the fact that everyone deals with money differently. Know what your differences are, then discuss and budget for your different attitudes. This lets savers save without hoarding, and lets spenders spend without splurging. Include a certain amount in your budget for discretionary spending or saving. Then the spender can spend that money however he or she likes, while the saver can invest it.

The way you were raised plays a big role on your money style as well. For example, some spenders grew up watching their parents struggle and refuse to deny themselves as adults. Conversely, some compulsive savers grew up in a similar situation, and refuse to spend money they can’t get back. Accepting and working with each other’s differences and compromising on a plan that takes into account both your money habits are the best ways to keep your relationship and finances healthy.

Be collaborative when you approach the topic. Don’t drop a bombshell on your partner and demand that he or she answer to you at that very moment. Start by saying something like, “I’ve been thinking some about our financial future lately. I wonder if this is something that the two of us should talk about as we look toward the future together?” You don’t need to have the conversation at that moment; both of you can take some time to think about what you’d like to discuss. If you do disagree with financial choices your partner has made, refrain from pointing a finger. Instead, ask for understanding in a supportive, non-judgmental manner by saying something like “Help me understand how this debt accumulated.”

Be Honest About Your Finances And Feelings

Whatever your conversation styles, it’s important to have honest and regular discussions about money – they keep you on the same page and prevent surprises on important financial decisions down the road. A mutual understanding of shared finances can help you maintain a healthy relationship. Being honest about your finances from the start—including any debt you carry, for example—will enable you and your spouse to avoid financial infidelity. If both parties aren’t on the same page, it leads to secrets, which can undermine a marriage. This is partly because money arguments encompass more than just finances. Money doesn’t just represent money; it represents love, power, control, self-esteem, and freedom.

About the Author: admin